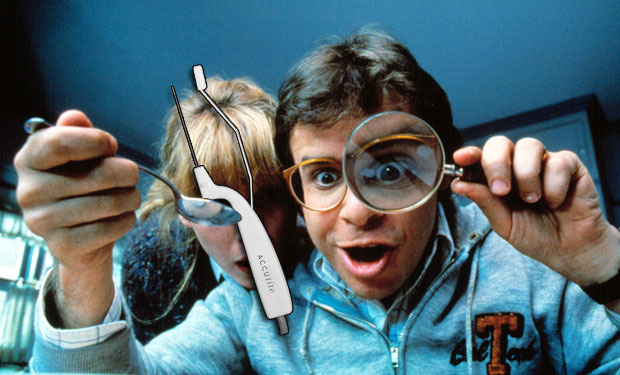 The 1980s gave us a lot of awesome things.  The fall of the Berlin wall, MTV, post it notes and RUN DMC to name a few.  But on top of my list is the kitchy yet comedic family adventure movies.

Think Goonies (1985),  Harry and the Hendersons (1987) and National Lampoon’s Vacation (1983) . Those privileged enough to remember Rick Moranis in Honey I shrunk the Kids (1989) will understand why I smile everytime I look at this AccuTite™ handpiece.

Inventor Wayne Szalinski (Rick Moranis), who has a lab in the attic of his house (what???), accidentally and unknowingly zaps his kids with his believed to be failed shrink ray. The bulk of the movie is spent watching the newly miniaturized kids fight their way back to the house through their backyard turned giant jungle. Crazy times!

Well I am now convinced that InMode, creator of AccuTite™ technology, has mastered the dark arts of miniaturization first championed by Wayne Szalinski.  One look at the AccuTite™ handpiece and it is clear to me that the InMode science team has shrink rayed their BodyTite™ and FaceTite™ handpiece to create a smaller yet formidable new version.  Well done Inmode Science team! 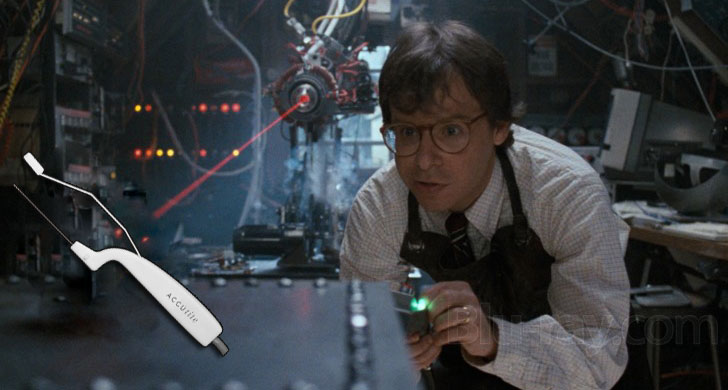 Smaller does not always mean better, but in this case, it is hard to argue with results.  AccuTite™ is tiny but just as mighty as it combines the power of BodyTite™ and FaceTite™ into a miniature device that fits in the palm of your hand.  It delivers powerful energy with extreme precision and accuracy. This revolutionary step in Radiofrequency-Assisted Lipolysis (RFAL) technology gives you a less invasive alternative to address small areas of the face and body, including; brows, lower eyelids, nasolabial folds, underarm and bra line, hands, knees, and so much more.

The main goal of AccuTite™ is to remove unwanted fat and tighten loose skin without incisional surgery. With this less invasive approach, you can avoid long recoveries, prolonged bruising and swelling, persistent discomfort, and even unwanted side effects of general anesthesia, like nausea and headaches. While not quite as powerful as formal surgery, AccuTite™ is a great middle option with transformative results.

The obvious difference between AccuTite™ and its older siblings, BodyTite™ and FaceTite™, is the size (thank you shrink ray!).  It is the smaller size that allows us to treat smaller areas that were previously off limits.  Eyelids, knees and hands are just a few of the areas we can now treat in the office with this incredible technology. One of the many benefits of an in-office procedure is that on the day of surgery you will be surrounded by people you know (the doctor, his assistant, and office support staff) while also avoiding the added cost of operating room and anesthesia fees. Some patients are concerned about being awake during surgery but rest assured, AccuTite™ can be completed safely and comfortably in the office with local anesthesia allowing you to get back to work and daily activities faster.

Maybe Rick Moranis’ character knew something we didn’t back in 1989.  Just as Moore’s Law predicted the miniaturization improvements in microchips (this is why our cell phones are so much thinner these days), Wayne Szalinski foreshadowed the true power of the shrink ray. The first real world example of this technology is here and it is awesome!

AccuTite™: Tiny but mighty and treats almost any small area of your body

Are You a Candidate?

Our AccuTite Virtual Consultation can tell you if you're a candidate in just minutes! It's the fastest way to identify which treatment option is right for you.